Banker | A Platform for Bankers 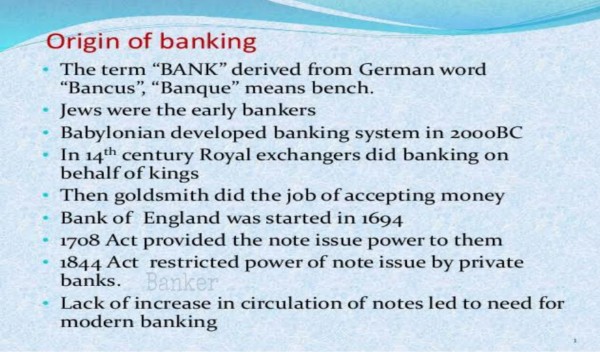 Banking comes from the very beginning of the human civilization. It reveals from the historical background that at first, the banking activities developed in 2000 BC in Babylon. The people having faith in the God used to keep their valuables and money in temples. This is called Temple Banking’. People of Babylon depositing their valuables in the temples thought that they were keeping those in the custody of the God-the most trusted. At one stage, Babylonians also started lending money and transferring funds from one place to another.

Banking similar to Babylonian type pre-existed in Egypt and Greece during the contemporary period. Such banking activities included remittance from one place to another as well. It found that the priests of those temples used to act as agents or intermediaries in between the depositors of valuables and borrowers. Temple Banking’ of those days disappeared subsequently due to loss of faith and various other factors.

In 600 BC, a bank namely ‘Shansi Bank’ was established in China. Many writers describe it as the first organised bank in the world. The functions of this bank include circulation of notes and many other activities of modern banking.

Subsequently, banking in modern sense originated in Italy where the Jews were found in doing banking. In England, the goldsmiths were also found keeping money and valuables of the people against a receipt issued by them as acknowledgement and getting back the deposits on demand. Besides, there were other two sections of people viz moneylenders and merchants who were also doing banking business in such manner or other.

Initially, the Christians did not engage in banking since ‘interest was prohibited by their religion. Subsequently, they were doing banking business when it became popular. Consequently, Bank of Venice was set up in Europe in the year 1157. The other European Banks, Bank of Barcelona was established in 1401, Bank of Genoa in 1407, Bank of Amsterdam in 1609, Bank of Sweden in 1659, Bank of England in 1694 and Bank of France were established in the year 1714.

In eighteenth century, modern banking was started in Indian sub- continent. Under the initiative of English Agency House, first European bank in Calcutta the Hindustan Bank was established in 1770 followed by Bengal Bank in 1785 and General Bank of India Limited in 1786. After that, many other banks were also set up. The Reserve Bank of India was established in 1934 as Central Bank under the Reserve Bank of India Act. After the partition of the sub- continent, Pakistan and India, the two separate countries were come to existence in 1947.

During the period from 1950 to 1958, three other banks, namely, the Premier Bank, Bank of Bawalpur and the Muslim Commercial Bank opened their branches in East Pakistan. The other four banks, the United Bank, Union Bank, Standard Bank and Commerce Bank started their business in the province during 1959- 1965.

There were only two banks owned by the then East Pakistanis, namely, the Eastern Mercantile Bank (now Pubali Bank Ltd.) and Eastern Banking Corporation (now Uttara Bank Ltd.) established in 1959 and 1965. After the liberation war in 1971, Bangladesh has taken its place as a new country in the Globe. The banking system in Bangladesh started functioning with 12 banks inherited from Pakistan. Bangladesh Bank was established on 16 December 1971 by Bangladesh Bank Order, 1972 as Central Bank of the country.

In the then Pakistan, Head Office of all the banks were in the then West Pakistan except Eastern Mercantile Bank Limited and Eastern Banking Corporation. Moreover, the responsible posts were occupied by the officials of West Pakistan and non-bengali people. After their departure following the liberation war, the banking system of Bangladesh had face a serious disorder situation.

To improve the situation, all the commercial banks excluding foreign banks were nationalized by a special order on 26 March 1972. In this process, the banks were grouped and established six banks with separate entity under the control of the Government. These Banks are Sonali Bank, Agrani Bank, Janata Bank, Rupali Bank, Pubali Bank and Uttara Bank. Sonali Bank was established comprising three banks, namely, the National Bank of Pakistan, the Bank of Bhawalpur Limited and the Premier Bank Limited while Agrani Bank comprises of the Habib Bank Limited and the Commerce Bank Limited.

Banking: The Evolution, Origin and Growth of Banking